The movie Friday is an undeniable classic.

It’s one of those films that has stood the test of time and is now a cult hit.

It’s hard to believe the movie which follows a day in the life of Compton resident, Craig (Ice Cube) and his weed head side-kick Smokey (Chris Tucker), turns 22 this year.

The love for the movie is so strong, Ice Cube confirmed during an appearance on The Late Late Show With James Corden that a fourth sequel is on the way.

Here are 10 interesting facts about the popular movie franchise.

#1. When Craig Calls His Horrible Girlfriend Joi, She Has Another Man In Her Bed

Craig’s girlfriend Joi is definitely one of the most ratchet characters in the movie.

In an early scene from the flick, Joi calls Craig to cuss him out for being out with another girl.

But one thing you may not have noticed though, is the fact that Joi has another man sleeping beside her in bed.

(He kind of blends in, right?)

If you’ve watched the movie closely, you may have noticed a super young (and super cute) Meagan Goode.
She played one of the neighbourhood kids in the movie.
But a harder one to spot is the performance of the late Michael Clarke Duncan.
He can be spotted in the scene were Deebo knocks Red out!
#3. Craig Opens The Movie Wearing The Same Outfit That Doughboy Wore At The End Of Boyz n the Hood. 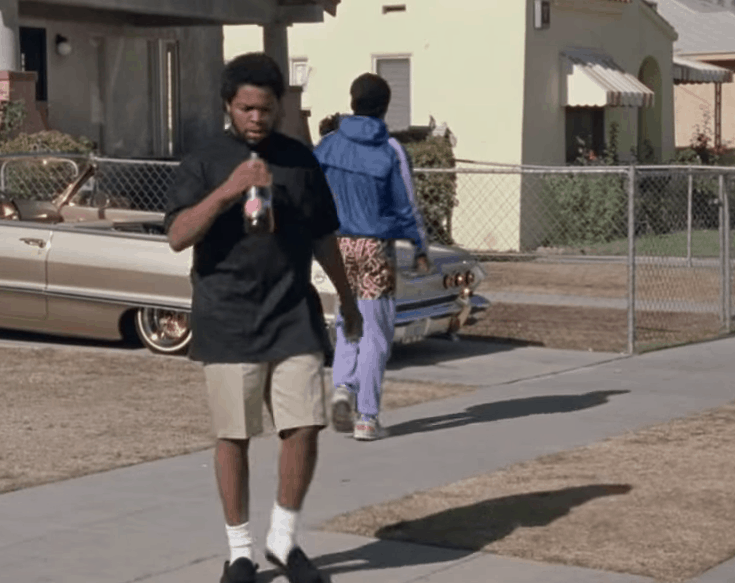 There’s been a theory floating around for years now that Friday is actually some sort of weird sequel to Boyz n’ the Hood.

Ice Cube made his acting debut in the John Singleton movie.

It’s noted that Ice Cube is wearing the exact same outfit at the end of Boyz n’ the Hood as he is in the opening credits of Friday.

4. The #ByeFelicia Hashtag Is All Wrong

Remember how everyone was using the hashtag #ByeFelicia a while ago?

She of course was the crackhead in the movie who would do anything for her next hit.

But turns out we were all spelling it wrong.

The character’s name in the move is actually spelt ‘Felisha.’

Speaking of Felisha, the actress who played the role, Angela Means, is the mother of University Of Miami quarterback Brad Kaaya.

Kaaya is expected to drafted by the NFL after his college career.

#6. Deebo Being Knocked Out By Red Was Filmed In Front Of Director F. Gary Gray’s Childhood Home.

Friday was filmed on location in South Central on 126th street, the neighbourhood where director F. Gary Gray grew up.

The classic scene where Red gets “Knocked the f**k out!” by Deebo was filmed in front of the directors childhood home.

The area was also known as Crip territory, so actors and crew were told not to wear red on set.

Can you imagine what Friday would have been like without Chris Tucker?

Before the role of Smokey went to Chris Tucker, it was offered to both Chris Rock and Tommy Davidson.

Both comedians had scheduling conflicts so it ended up going to Tucker.

Director F.Gary Gray has been quoted as saying he had to fight for Chris to be in the movie.

Ironically by the time they were ready to shoot the sequel, Next Friday, Tucker’s career had really taken off so they couldn’t afford him.

#8. The Friday Soundtrack Did Better Than The Movie

Although it had a strong opening, Friday was never big at the box office.

It debuted at number two, and ended up making over $28 million worldwide.

Not bad for a low-budget flick that cost less than $3 million to make.

At the time, the soundtrack was even more successful than the film, debuting at #1 on the Billboard album charts, eventually going double platinum.

It also spawned a massive hit for Dr.Dre: “Keep Their Heads Ringing”

Before becoming a director of feature films, Gray directed a ton of music videos.

One of his best know videos is for Ice Cube’s “Today Was A Good Day”.

#10. There Was A Short Lived Animated Series Spinoff.

Friday was made into a cartoon.

The spinoff played on MTV2, but only lasted a grand total of 8 episodes before it was taken off the air.

This may have had to do with the fact that none of the original actors voiced the characters on the show.