In this day and age everyone has a camera phone.

And if you’re a teen sitting in a classroom and your teacher starts fighting with the assistant – what are you gonna do?

Well, shocking footage has emerged of a teacher and a paraprofessional brawling in a classroom.

Horrified teenage students, screamed in horror (and then proceeded to film the whole incident.) 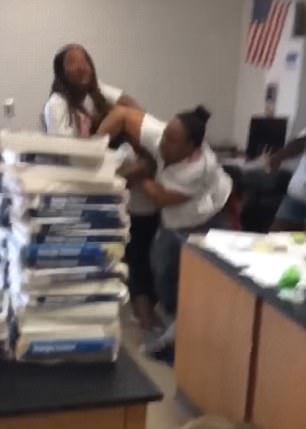 The video was taken at Stone Mountain Middle School on the outskirts of Atlanta, Georgia.

It showed the two women slapping each other around the head and pushing one another into the white board.

At the beginning of the video the children appear to be doing work and some had headphones in.

But suddenly, the fight breaks out and the shocked students start screaming.

Some of them try to approach them to stop it but soon stepped back as the pair’s fighting escalated.

They were eventually torn apart by another member of staff who ran in to the classroom screaming ‘stop! stop!’

Both women were fired from the school and neither has been named since the footage emerged.

Shocked parents welcomed the decision, telling WBSTV Atlanta that the fighting set a bad example for their children.

In a statement sent to parents, the school condemned the women’s behavior.

‘The interaction and conduct in the video is completely unacceptable and contrary to our district’s tenets and core principles.

‘Those staff members that participated in the conduct have been removed from the learning environment,’ it said.

Both women were charged with disorderly conduct in a public space.